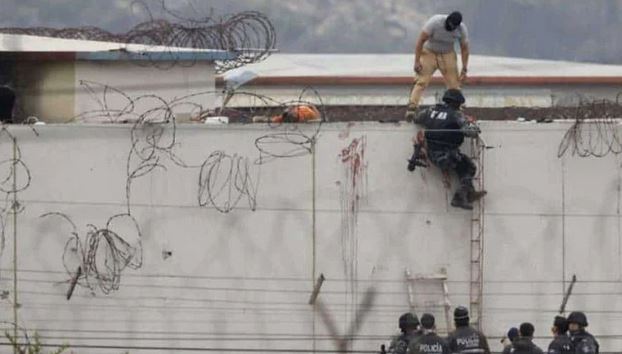 Quito: (Web Desk) At least 15 inmates have been killed and 21 injured in a clash between inmates at a prison in southern Ecuador.
According to authorities, inmates used guns and knives to attack each other during the confrontation.
The prison, located in southern Ecuador, has seen 7 major riots since 2020, with more than 400 inmates killed in drug-trafficking-related riots.
Most of the inmates in Ecuador’s prisons belong to drug-trafficking gangs.

Imran Khan made a big mistake by giving extension to General...

Concerns about the League began to mount within the PTI (PR). ...

Dr. Asad Majeed, we need to support our artists to advance...

Education is not enough for you, you have to farm, a...

Sialkot Airport will be temporarily closed for 16 days from today ...

GNJ News Following the settlement of matters between the MQM and the People's Party, the Election Commission has issued a notification after Jale leader...
Read more

Concerns about the League began to mount within the PTI (PR). GNJ News

GNJ News While Chaudhary Parvez Elahi and Munis Elahi have been openly saying for the past few days that the post of Chief Minister...
Read more

GNJ News LAHORE: Interior Minister Rana Sanaullah has said that talks are never conditional and politicians will not run away from sitting in negotiations. Interior...
Read more

Dr. Asad Majeed, we need to support our artists to advance the soft image GNJ News

GNJ News Pakistani Ambassador to European Union, Belgium and Luxembourg Dr. Asad Majeed Khan said that the language of art and culture is a...
Read more

Education is not enough for you, you have to farm, a young man who changed his life from farm to Microsoft – Daily Ausaf ...

GNJ News The words 'dull', 'fail', 'fail' are often heard from these children Meet those who, for one reason or another, lag behind other children...
Read more

GNJ News At a government school in Rajasthan's Hanumangarh, students were given free milk under a new scheme by the government, after which the...
Read more
Load more